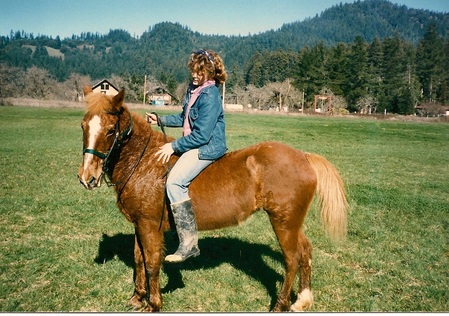 Sunshine, January 1986
My very first horse was a small Morgan/Welsh cross mare.  Well, at least that's what they thought she was.  I didn't care.  She could have been a zebra and I would have been just as delighted.  When I left my mom's house in Sacramento and moved to rural Humboldt County to live with my dad, there was finally room to have a horse.  My step-mom had horses throughout her childhood and early adulthood and quickly recognized the horsey bug in me.  I don't know how long it took, but she finally wore my dad down, and he agreed that I could have a horse, BUT ...  You know what's coming, here.  I had to pay for everything and it was going to be my responsibility to do all the feeding, etc.

The first part of all that meant clearing the thick brush that covered the only level spot on my dad's eleven or so acres.  And when he said I was going to help do the work, he meant it.  We spent many hours cutting dense brush, ripping out stumps, burning branches, and building the fencing.  And I was there for every minute of it.  I had bug bites, scratches, blisters, and sore muscles.  But it was worth it.  I'll say this for my dad - he made me earn everything I got, but I am so glad that he did. Every dollar I now spend on my horses comes with the recognition that I've worked hard for that dollar followed by the question, is this worth buying?

When we went to look at Sunshine, that was her name, I knew I wanted her before we even got there.  What wasn't to like?  She had four working legs and was free.  She was small, but very sturdily built, a brilliant copper color with a thick flaxen mane and tail, and was in her early teens.  It didn't hurt that she was super cute and had a very friendly eye.  No one thought to put a saddle on her.  She was bridled, and I was popped up on her back.  They sent me out to a neighboring field to give her a try. Within a few minutes, I had her smartly trotting around ... and then she wasn't. She bucked me off, and I hit the dirt.

Her owner, a father of several no-longer-interested-in-horses children, was very disappointed that I had fallen off.  He was hoping to be rid of the mare, one less mouth to feed and all that, and was certain that I no longer wanted her.  Quite the opposite, I was actually terrified that my dad wouldn't let me get her since I had fallen off.  I caught her and brought her back to my dad and step-mom, sheepishly asking if I could still get back on her.  My dad, bless his heart, fully expected me to.  I think he would have been pissed at me for making him drive all the way out there only to get bucked off and quit so easily.  In his mind this was one of those by God, you wanted a horse, now get back on it! moments.  It seemed as though he and I were, for once, on the same page. 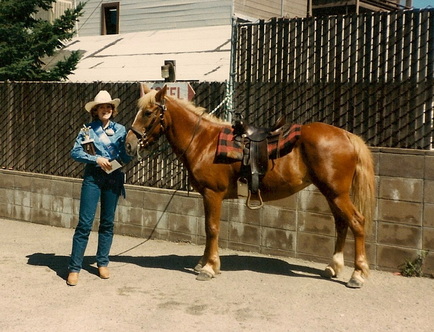 Me and Sunny with my trophy, sash, and a tiara that you can't quite see.
Sunny came home with me, and my life as a horse person began.  I will be forever grateful to my dad for forcing me to be the person responsible for the care of my first horse.  He doesn't know what a wonderful gift he gave me.  I was given the opportunity to learn about equine care completely on my own.  No one told me how much to feed, when to have shoes done, how to worm, or even if my tack was right.  Or, at least that's how it felt.  I know that my step-mom hovered in the background making sure that I didn't starve, mistreat, or neglect Sunny.  But once she could see that I really was committed to this horsey life, she let me make my own way.

I read every book and magazine that I could find.  I researched hay prices and teamed up with people to have it delivered by the truck load to save money.  I bought in bulk when I could, and took great care not to waste feed.  True to my dad's word, I did have to pay for everything.  He helped me find a job where I worked eight hours every single Sunday at a local Mom & Pop diner.  I made enough to buy hay, grain, shoes, wormer, and the tack that I needed.  My step-mom still laughs at the "account" I kept on the refrigerator door showing how much money I owed my dad.  I usually couldn't afford to pay for the whole ton of hay, so I would borrow from my dad and pay him back each Sunday with the cash I made in the diner. It seemed that as soon as I had one ton paid for, it would be just about time to buy the next one. 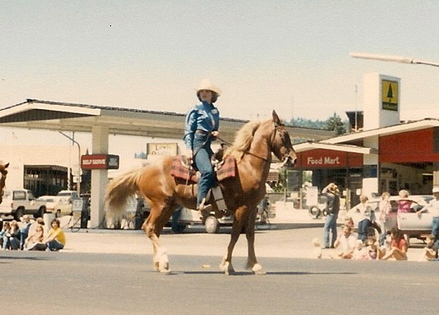 Riding down Main Street
One of my all time favorite memories with Sunny was the summer I ran for Garberville Rodeo Queen, and won.  It was the real deal: tiara, sash, parade, rodeo.  It still ranks as one of my all-time favorite horsey days. Riding down Main Street on my sparkling pony, leading my "court," - it seemed to be a scene out of the many horse books that I read as a kid. Part of the Rodeo Queen's duties were to actually go to the rodeo and ride in the grand opening.  The queen's name is announced and she does a victory gallop while all the other rodeo contestants hold the line in the arena's center.  Are you kidding me?  I get to do what?  I truly could have died on that weekend and would have felt as though my life had been worth living.

Sunshine was an outstanding first mount.  She taught me a lot about not falling off, which I did many, many times.  She also taught me that horses cinched up too tightly nip their owners.  I also learned to pull my knees in tight around tight corners, and that the view from between two furry ears can't be beat.  Sadly, Sunshine suffered a small bone break in her fetlock during a morning canter and had to be euthanized.  Her final lesson for me was the one about loss.

After Sunshine, there many other horses: Nakota, Gideon, Corky, Sassy, Montoya DSA, Mickey Dee, G Ima Starr FA (also known as Speedy G), and Sydney.  Each of them has their own unique story to tell.  I hope you'll read about the rest of them.