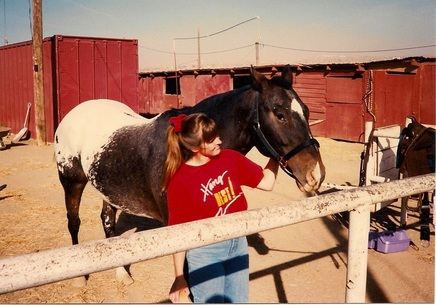 A leased horse. I think his name was Skyhawk.
Sassy's story is not remarkable in any way.  There was no love at first site, no fireworks, and certainly no surprise births.  Sassy's arrival marked my first adult purchase outside of school or marriage.  I think it was the first time that I did something completely on my own as an adult.  I was 24 years old.

I married my husband the summer that I finished earning my teaching credential.  I left my college town and joined him in Bakersfield, far from my own family and friends.  I was lonely, but I made friends quickly, and dove into my new career.  Within about six months, the horse bug resurfaced.  I am certain that my husband believed the horse thing was just a childhood passion, but I knew better.

One afternoon I opened the phone book to search for a nearby stable in hopes that I might at least find a rental option.  Just minutes away from our apartment was a place, and after a quick chat, the owner told me to come on down.  He pulled out a large appaloosa gelding and asked if I'd like to try him out.  After a quick ride in the arena, I asked what it would take for me to get to ride him whenever I wanted.  I honestly don't remember all of the details, but I entered into a simplified feed lease where I simply paid his board bill, and they took care of the rest.  I don't remember discussing it with my husband, but I do know that he came out and took pictures of my "new" horse.  I leased him for a few months, but quickly realized that he had some training holes, and I didn't want to waste my money training someone else's horse.  I "quit" the lease option and put the money I was paying toward board in the bank.  My husband received a small bonus at work that fall and generously gave me several hundred dollars to use as I wanted.  It also went into the bank. 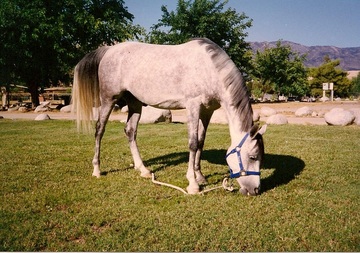 Sassy in the summer of 1996.
By spring, I had saved about $750, and I started reading the classifieds each day. Back then of course, horses were relatively cheap and dozens were listed in the paper. I searched eagerly for a big quarter horse mare that could easily tote me through the hills on the edge of town.  I have no idea why my eye caught the listing for a five year old Arabian mare.  I hated Arabians.  I always said they were like riding a fence rail ... skinny and ugly!  Even so, I secretly took the classified section to work and put in the call.  After work that afternoon, I drove across town to a little house with pasture out back.  There stood a small, dappled gray mare.  She was quite cute and had the softest eyes I had ever seen on a horse.  I now know that Arabians are well-known for their lovely and expressive doe eyes.

I didn't tell anyone that I was buying a horse.  Not even my new husband.  Sound familiar?  I wrote the man a check for $800 and told him I would be back the next day.  The problem was that I had no truck or trailer, no halter, no tack, and no idea where I might even keep her.  Even so, I wasn't worried about how I'd get Sassy home.  I had a horse again and that was enough.  When I got home, I had an enormous smile plastered on my face.  No amount of effort on my part could subdue it.  My husband knew what it meant immediately.  His first words weren't even a question.  "You bought a horse!"  Yep.  And my already wide smile got wider still.

[A side note: I should have known even way back then that he was a keeper.  How many young husbands would be "okay" with a wife making such a large purchase without even the courtesy of a consultation?  I love you, sweetie!]

When I arrived at work the next morning, I found a co-worker who had horses.  She and I had just started a new friendship, and I felt comfortable asking for her help.  She doesn't remember this, but she quickly called her barn manager who arranged for a truck and trailer to go pick up my new horse.  I gave the address where Sassy lived and agreed to pay the driver $50 for his time and effort. 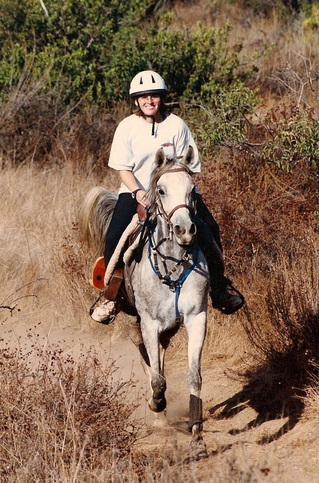 Riding Sassy at the Caspar's Park Challenge 50-miler in 1998
Sassy and I had a lot of fun together trail riding.  She was also my first endurance horse. I "raced" her for several seasons until she began to develop some lameness issues. Endurance riding is very hard on horses.  Not many of them can withstand the concussive forces that come from trotting mile after mile.  It eventually became apparent that the job of endurance mount was simply too hard for her so I decided that being a family horse was the best job for her.  Another co-worker was looking for a smaller, well-broke horse for her kids to ride.  It was a perfect fit.

That co-worker who helped arrange Sassy's transport is Taz's mom.  At the time, she had a gray Arabian mare named Abby.  We rode those two little mares hours and hours and mile after mile.  Thanks to those two Arabian mares, the friendship that grew between us has lasted almost two decades.  The most important lesson that Sassy taught me was one about building and maintaining friendships.

I am glad I never did find that big quarter horse.  My life took a very different path than what I had planned when I bought that Arabian.