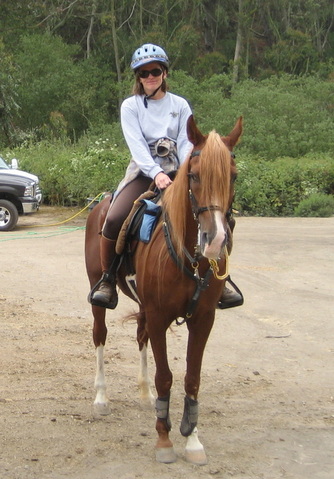 Camping at Montana de Oro, summer 2009
.... also known as "Sweetie-Petie-Pie" around the barn and "Fast and Faster" on the trail.

For quite a while I tried to write this story.  I just wasn't able to find words that were eloquent enough to describe her.  And after writing several drafts, I still couldn't.  Montoya was a very special horse and everything that I write, or attempt to write, comes out sounding trivial.  I really wanted her story to convey how special she truly was.  Even though my words won't leave the impression I want them to, I hope you'll try to see past them and recognize what a spectacular horse she was.

Montoya was hell on wheels, a bitch when she needed to be, and a monster trail eater.  If you needed to get somewhere, anywhere, all you had to do was think, go, and you'd be there.  And if you were already hustling down the trail, she could find another gear.  I never used up all that was in the tank.  It made her difficult to ride because I never knew if she was on the verge of being over-ridden.  In fact, she always acted as though I was holding her back.  She always had more to give. Even in the last moments of her life, she offered more.

My time with Montoya started on a very late December night in 1998.  Jim Bumgardner was supposed to have arrived late in the afternoon with a trailer full of horses for me to look at.  He was late, very late.  The temperature was in the 30s and it was after 9:00 p.m. before he pulled into the barn area.  Even though it was late, he wanted to continue on to Ridgecrest, several hours to the east.  So without any more delay, my group of friends helped unload five or six mares from the trailer.  Several were given an immediate no; one looked sick with a snotty nose, one was too small, and one was priced out of my budget. Two or three were left standing in front of us.

I don't remember much about the others, but Montoya caught everyone's eye immediately. She had the most amazing mass of tangled mane that any of us had ever seen.  Even in the dark it stood out.  It hung down past the tip of her shoulder and nearly touched her knee when she lowered her head.  Her forelock covered her entire face and was the same flaxen color as her mane.  Her tail, also lush and thick, was red.  When I got close enough to stroke her face, I found that her mane and forelock were matted with tar weed.

A friend trotted out the remaining horses for me to evaluate.  Montoya had the nicest movement of the group, and she looked sound.  We all agreed that she seemed to be the best endurance prospect of the bunch.  Jim Bumgardner had to return our way in a week or so and offered to trade her out for one of the others when he returned if I found that I didn't like her.  I gave him a check, and he gave me her Arabian Horse Association registration papers.  We later discovered that she was quite well bred with a mostly Russian ancestry.  She was nine years old.

Jim Bumgardner didn't have to come back for her.  I kept her.  Over the next few days I cleaned her up and began a decade's long effort to control her unruly mane.  The tar weed wouldn't clean out of her forelock, and I was forced to cut most of it off.  It grew back in record time and hung to the top of her nose for the rest of her life.

I bought Montoya in the middle of a December night based solely on a trot out.  At 27 years old, it never occurred to me that she wasn't broke or that she would be too hot for me to ride.  I could ride anything. Literally.  I did discover that while she was broke, and I use the word very liberally, it had been many years since she'd been under saddle.  And she was hot.  Fiery hot.  Fortunately she wasn't a bucker, and as long as we were going forward, she was happy. 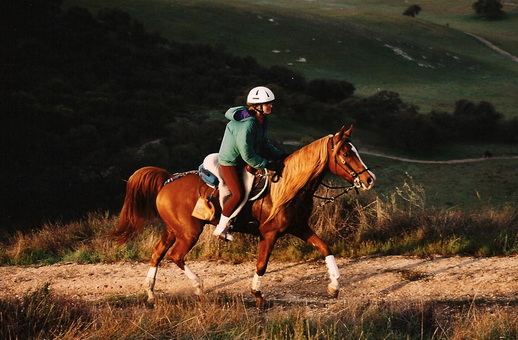 Lakeside Classic 25-miler - April 1999
I took Montoya to her first endurance ride that April, just four months after buying her. Trailering, camping, and standing tied were taken in stride.  All she cared about was working.  She tolerated everything else.  We rode the limited distance 25 miler at Lakeside in just over three hours.  We flew over the course as though she had wings.  I remember cresting a hill at the halfway point and saw the vet check just over the top.  Montoya had never been to an endurance ride and didn't know what to think of the mass of people and horses in the middle of the trail.  Her head snapped up, and she slowed her methodical charge. She was completely baffled, but like she would do for the rest of her life, she made a mental note of the strangeness of humans, and continued working.

The first year that Montoya and I competed together we completed seven endurance races; a 25-miler, five 50s, and a 75-miler.  We traveled to Oakland (San Francisco Bay area), to the Sierra Nevada Mountains, to the Pacific Coast, and to Los Angeles and beyond.  We even drove to the east side of San Diego for a race where we could almost see across the desert to Mexico.  It was a rewarding, and exciting, first year together.

The next year we rode several 50 mile races and completed three one-day hundred milers.  We earned 6th place in the lightweight division for the AERC Pacific Southwest Region.  It was quite a year.  Montoya and I continued to have many exciting race seasons.  In 2002 we earned the Fire Mountain Award of Excellence for completing a series of races with the same horse/rider team: the 4-day 200 mile Death Valley Encounter, the 20 Mule Team 100, and the Eastern High Sierra Classic 50.

3-Day Cuyama Oaks XP Pioneer - 155 Miles - March 2003
Over the years, we entered many more endurance races including two more hundred milers and a handful of multi-day races.  We also enjoyed week long camping trips and trail rides with friends.  Taz's mom rode Montoya in four endurance races while Taz was in training and later injured. I even bred her to one of Sheila Varian's stallions in 2004, but she lost the fetus at two months.  It was one of the saddest times she and I shared, but it wasn't meant to be.  Montoya was never ill, and suffered only one minor injury.  It took a year of long slow work, but she recovered fully and continued her endurance career. 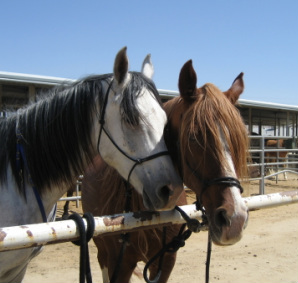 Speedy G and Montoya DSA - April 2009
Montoya was also a leader and buddy to three of my other horses. She kept Sassy company until she finally moved on to live with a new family.  She was a rock of stability to Mickey Dee, a project horse who became much more.  And of course she helped Speedy G adjust to life as an endurance horse.

In January of 2010, Montoya colicked and was euthanized. The necropsy revealed a blood clot that had broken loose and found it's way to a capillary that provided blood to her intestines. When the blood flow stopped, a length of intestine died.  Surgery would not have saved her.

Montoya's death was such a sudden and terrible loss that I found it very difficult to read the thoughtful condolences that were sent to me.  I appreciated them, but I couldn't read them.  I tucked each one away to be read someday in the future.  Taz's mom wrote a lovely tribute that I have never shared with anyone.  I think it's time.  Here it is. 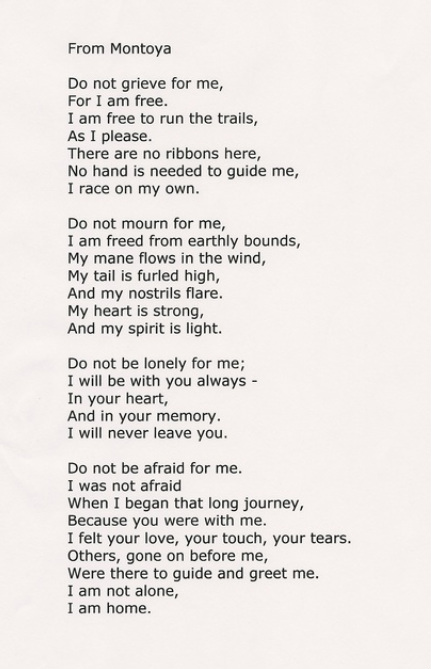 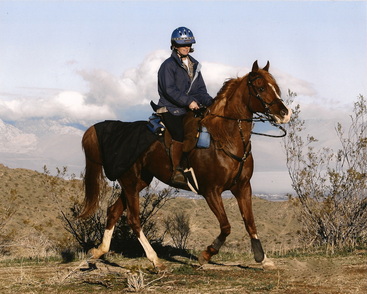