A "How to Guide" for acquiring your 2022 memberships.

When I first started in dressage in 2010, I assumed that each state had its own dressage society. In my little world, it just made sense that there was one national dressage body and a neat little group of 50 state societies. Nope. That's not how it works. Thanks to a friend, I was forced to do a little research and now know how the United States Dressage Federation (USDF) recognizes local affiliates. Another rider also chimed in and reported that some of the GMOs (more about that down below) do more than just dressage, like eventing for example. If you belong to a dressage club that does more than dressage, please share!

​​US Equestrian, started in 1917, is the national governing body for all equestrian sports here in the USA. US Equestrian membership is required for nationally rated dressage shows (USDF/USEF). Non-members may show, but they will incur non-member fees. When you join US Equestrian, you will be asked if you are an Adult Amateur or Open rider. Once you select Open, you cannot easily return to amateur status. Senior Adult Amateur status does not cost anything extra. If you want to participate in CDS or USDF rated shows shows as an Adult Amateur you'll need to join United States Equestrian annually as well as complete the SafeSport Training. ​If you are not a US Equestrian recognized Adult Amateur, you will be required to compete in Open classes (the professionals of our sport).

If you plan to show at nationally rated shows, your horse will need a US Equestrian identification number of which there are three options. First, if you would like your horse to be eligible for US Equestrian year-end awards, he will need a Lifetime ID which can be purchased with a one-time fee. Second, you can opt for an Annual Recording Number for an annual fee. Finally, a Horse ID number, with no eligibility for awards, is free. To get a Horse Recording Application/ID, simply log in to your US Equestrian account, scroll down to "Horse Options," select Horse Recording Application/ID, and follow the on-line instructions. To join USEF, or for more information, click ​this link.

​​​The United States Dressage Federation has approximately 173 local affiliates. These affiliate clubs are called Group Member Organizations (GMOs). By joining CDS, you automatically become a Group Member of USDF.  There are five different types of memberships in USDF: Participating, Youth Participating, Group, Education, and Business. Since each membership is slightly different, USDF recommends that you read about each membership carefully before joining. To join USDF, or for more information, click ​this link.

If you plan to show at USDF/USEF shows, your horse will also need a USDF Lifetime Horse Registration (LHR) or Horse Identification Number (HID). If you would like your horse to be eligible for year-end awards, you must purchase a LHR for a one-time fee. To just receive an HID, with no eligibility for awards, there is a one-time cost. To upgrade an HID to an LHR, there is an upgrade fee.

​​Join the California Dressage Society for $75.00 annually. If you plan to qualify for Regional Adult Amateur Competition (RAAC), there is an additional $25.00 annual fee. CDS membership allows you to show at CDS and USDF recognized dressage shows. Non-members may show, but they will incur additional non-member fees. CDS Membership includes Group Membership in USDF, which is needed for USDF/USEF rated dressage shows, as well as the opportunity to participate in the Adult Amateur Clinic and RAAC. Members are also eligible to earn Plates, which can be added to a plaque available from CDS. CDS also offers a number of other award programs such as the GEM Rider Award and Horse Performance Awards. To join CDS, or for more information, click this link.

How The Memberships Work Together 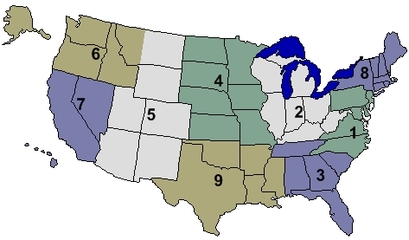 USDF Regions
USEF is the umbrella over all US equestrian sports. USDF falls under that umbrella with its ten regions: numbers 1 - 9 are national, and the 10th is international. Since I live in California, I belong to region 7. My GMO is the California Dressage Society (CDS).

There are are least four types of dressage shows in California. The first are simple schooling shows. Any type of judge may be used, even "L Graduates" from the USDF Education Program (not yet US Equestrian licensed judges). Schooling shows can range from casual to quite formal and generally look and feel like a rated show. Given that schooling show are "unrated," the rules are often more relaxed. Ride times may run a bit wonky, and rider attire can include regular breeches and a polo shirt. Many CDS chapters even put on schooling show series that have year-end awards and prizes.

The next level of show in California is a CDS-rated show (a USDF GMO). One-star shows, as they are called here, follow all USEF rules, but scores are only used for CDS awards, the CDS Championship, or the Regional Adult Amateur Competition. One-star shows will have a licensed USEF judge, although they are sometimes the lower level judges.

The third type of show in California is referred to as a three-star event, recognized by CDS (or DASC which is the Southern California Dressage Association - another GMO of USDF), USDF, and US Equestrian. These shows usually have higher level judges and will often times attract more accomplished riders. Scores are used for national level awards as well as GMO awards.

The final type of show seen in California are the CDI shows: Concours Dressage International, a dressage competition recognized by the FEI. CDI-W have World Cup qualifying or World Cup classes, while CDI-O have Olympic qualifying or Olympic classes.

The time to renew memberships for US Equestrian, USDF, and CDS is November and December. Now you know which memberships you're going to need for this show season. Best of luck!