I got my first horse when I was 13 or 14, but like every horse crazy girl, I had dreamed about having a horse of my very own for my whole life. Here is my story. 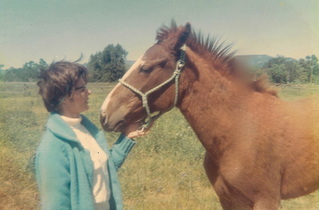 Grandma Fleeta and Gypsy, 1968
I’ve been around horses, on horses, near horses, and sometimes even under horses, my whole life. My first horse was a little Welsh-Morgan cross mare with a coat as brilliant as a new copper penny and a mane and tail the color of straw. I was under that little mare every time I rode her until I learned to stick her sudden right-left swerve.

My grandmother, Fleeta Finnegan, had horses. I always loved grandma’s first name, Fleeta. It even sounded horsey. She and my grandpa Charles leased a farm and covered it with hot wire stalls, several ramshackle sheds, and even an arena filled with jumps. And of course there were the horses. Some were hers, some belonged to boarders, but in the stories that I would weave as I sat in the dirt near their pens, they all belonged to me. 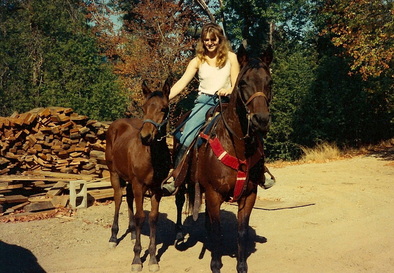 Riding Corky, with Gideon being ponied, 1987
I longed for those Saturdays when my mom would utter those glorious words, “We‘re runnin’ out to Momma and Daddy’s. Get in.” She really called them that. Momma and Daddy. Even as a kid I thought it odd that an adult woman would refer to her parents in that way. It didn’t really matter though. A trip out to grandma’s meant that I was going to see the horses, and with any luck, Grandma might need help feeding or grooming.

I know now that having a little girl helping her was anything but help. I would follow my grandmother around racing ahead to open gates, tote buckets filled with grain, and push the alfalfa-laden wheelbarrow from paddock to paddock. I can still hear the clack ...clack ... clack of her electric fence humming and see the big green and red light bulbs that adorned the front of that machine. It hung on the wall of the screened in porch on the back of the house. It had a thick pile of dust over it and often times I would wipe the dust off the bulbs to check which of the bulbs, green or red, was lit. I learned that fence stung if you forgot which bulb meant “fence on.”

Grandma Fleeta gave riding and jumping lessons to little girls and ladies wanting to ride. Her arena was filled with brightly painted jumps, white cavelleti poles, and even a dingy old mirror mounted to a wooden frame. She would sit on a jump painted to look like a brick-wall drinking Diet Pepsi and call out instructions to the ladies riding. To me she was beautiful in the tan breeches, sleeveless tops, and tall black boots that she always wore.

For a very short time, my mother arranged for me to take riding lessons with Grandma Fleeta. And even though she was my grandmother, my mother refused to take anything for free. After taking a lesson, I was required to clean pens with a wheelbarrow and a big metal shovel. While I enjoy cleaning my horses’ stalls today, as an eight year old, the wheelbarrow and shovel that I was assigned were both heavy and clumsy.  I resented the work, but I would have done anything to be around those horses. The lessons didn’t last long however, since spending money on gas to drive all the way out to grandma and grandpa’s house for a weekly riding lesson was just not a priority for my single mom.

My mom’s brother and his wife lived a bit closer so we spent more time with them. My uncle was a horseshoer, as were his two other brothers. It seemed as though everyone had something to do with horses, everyone except me. Even my cousin delighted in tormenting me with the fact that she had a black and white pony named Joker and I didn’t. She never wanted to ride him of course, and worse, would never let me ride him either. I spent many afternoons on the fence daydreaming about what it would be like to ride Joker. I never did.

Then at twelve years of age, all of that changed. I moved north to live with my dad  and suddenly, I had a horse. And then there was another, and another, and my days were filled with riding with no one saying I couldn’t. The only rule was that I be home by dark and that if I got hurt, it was my own fault.  It was as though the very doorway to Heaven had been opened to me. I spent every afternoon, and both weekend days, exploring the Coast Mountain’s logging roads and meandering the Eel River’s beaches. 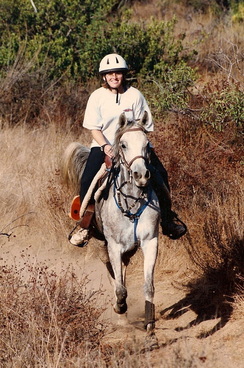 Riding Sassy, 1998
During those years of riding as long and as far as I wanted to, I became a horse person. I knew then that horses would always be part of my life. And so when college came and I was horseless yet again, I knew that it was only temporary. Six years passed before I was able to bring a horse back into my life. During those horseless years I graduated from college, began a career, and got married.

The first horse that found me was a lovely little Arabian mare named Sassy. I found her on my daily search of the newspaper’s classifieds and bought her on the spot. I had no place to keep her, no tack with which to ride her, and I hadn’t mentioned to my new husband that I was even purchasing a horse! As it is with horse people, help arrived almost immediately. A co-worker contacted her stable’s manager and arrangements were made for the mare’s transport to her new barn. And once again I was exploring dirt roads through rolling hills and trails that lined a meandering river.

Before long, I spotted a fellow boarder at the equestrian center where I boarded Sassy, riding his Arabian gelding off into the distance. I soon discovered that he was an endurance rider, said with a bit of derision by others at the barn. I didn’t know it at the time, but he had also been watching me ranging farther and farther along the trails each week on my own sturdy little Arabian. Endurance riding is a sport with limited, but growing numbers, and can only survive if more people join up, and so endurance riders have become well-known for their powers of recruitment. At Jim’s invitation, I started tagging along with him and his family, and before I knew it I was competing at nearby endurance rides. I quickly found out that endurance riders ride their horses a lot.

And as always happens, one horse became two, and life with horses continued. 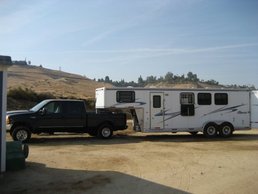 Truck and Trailer
Never having had a trailer, or access to one, I had never experienced the world of showing or competing with horses until I met Jim and his family. Now an adult, I realized that I could make that happen if I wanted to, and I decided that I would. Several years, and thousands of endurance miles later, I finally purchased a trailer of my own. As a kid, I had thought the ultimate joy in life would be to tow a trailer down the road with an equine nose poking out the window. I wasn’t disappointed when I hauled my first trailer home from the dealership. I was certain that every other driver on the road was staring at me in admiration, and maybe even a bit enviously. I was truly in Heaven. Many years, and thousands of highway miles later, I still grin as I haul my horses to wherever we’re going. And I still enjoy seeing a nose poke through the window. 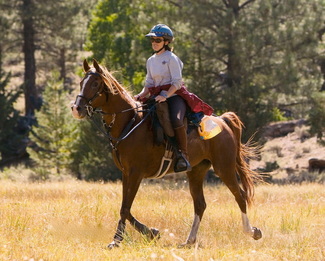 Riding Montoya DSA, 2009
As one horse left my life and another entered, endurance riding began to lose its appeal. I started endurance riding in the spring of 1996 doing a few limited distance events, but quickly moved on to 50 milers, 100 milers, and multi-day rides. Sassy carried me over 500 race miles before becoming a family trail horse. Montoya DSA, my super star, carried me 2,550 race miles, 500 of which were one-day hundred mile races. Montoya also carried a friend for 200 miles when she needed a horse to ride. Mickey Dee, my project horse, carried me more than 300 race miles before he too, became a trail horse. And then came G Ima Starr FA, also known as Speedy G. He was supposed to be my next endurance horse, but after just a few limited distance rides, and a couple of 50 mile rides, I just seemed to lose my enthusiasm for the sport.

I am not sure that it was any one thing. It might have been losing Montoya to colic in 2010. Or maybe it was the 15 years of having to ride three to four hours every Saturday in order to condition the horses. It might also have been Speedy G’s less-than-enthusiastic attitude about riding 50 miles in a single day. I didn’t plan on quitting endurance riding, but I went to an endurance ride in early June of 2010, and I didn’t put my endurance saddle back on a horse for five months.

During the summer of “no endurance riding,” as I called it, I took twice weekly dressage lessons and accidentally found a new love. After each lesson, I counted the hours until the next one. I quickly went from dusty, dirty endurance rider to a black coated, white breech wearing dressage rider! Even though we weren’t quite ready, I took Speedy G to four, one-star dressage shows over the summer of 2010 and loved every minute of it. That same fall and winter I took Speedy G to a triple-rated show and a schooling show where we did well. Or well enough. As with endurance riding, we’re riding to improve over our own previous score, not so much in competition with other riders. At least for now.

Riding Speedy G at the GEAHS Spring Open Dressage Show, 2011
Membership dues are renewed in the fall.  Sadly, for the first time in 14 years, I did not send the American Endurance Ride Conference a check. Instead, I now carry around membership cards with new abbreviations: CDS, USDF, and USEF. I will miss that AERC card. It’s a special group of people that ride endurance and one that I will no doubt miss. Even though the letters on my membership cards will be different, life with horses will continue.

And as long as I am around horses, on horses, near horses, and sometimes even under horses, I will continue to be a horse person.